Ductile Iron Pipe: It is a pipe made of ductile cast iron commonly used for potable water transmission and distribution. This type of pipe is a direct development of earlier cast iron pipe, which it has superseded. The ductile iron used to manufacture the pipe is characterized by the spheroidal or nodular nature of the graphite within the iron, the pipe is manufactured using centrifugal casting in metal or resin lined moulds. Protective internal linings and external coatings are often applied to ductile iron pipes to inhibit corrosion: the standard internal lining is cement mortar and standard external coatings include bonded zinc, asphalt or water-based paint. In highly corrosive environments loose polyethylene sleeving (LPS) to encase the pipe may also be used. Life expectancy of unprotected ductile iron pipes depends on the corrosiveness of soil present and tends to be shorter where soil is highly corrosive. However, a lifespan in excess of 100 years has been estimated for ductile iron pipelines installed using “evolved laying practices”, including use of properly installed LPS (polyethylene encasement).Ductile iron pipe is sized according to a dimensionless term known as the Pipe Size or Nominal Diameter (known by its French abbreviation, DN. Nominal pipe sizes vary from 3 inches up to 64 inches. Pipe dimensions are standardized to the mutually incompatible with ISO 2531 / EN 545/598Water based pipe coatings, are an environmentally friendly coating that is applied to the inner & outer diameter of ductile iron pipe. They protect against corrosion from the outside and inside, and also protect the product from contamination. The coating is an emulsion manufactured using asphaltene and water primarily, with other raw materials according to the manufacturer’s specifications.

Individual lengths of ductile iron pipe are joined either by flanges, couplings, or some form of spigot and socket arrangement.

Flanges are flat rings around the end of pipes which mate with an equivalent flange from another pipe, the two being held together by bolts usually passed through holes drilled through the flanges. A deformable gasket, usually elastomeric, placed between raised faces on the mating flanges provides the seal. Current flange standards used in the water industry are, EN 1092 in Europe

Spigot and sockets involve a normal pipe end, the spigot, being inserted into the socket or bell of another pipe or fitting with a seal being made between the two within the socket. Normal spigot and socket joints do not allow direct metal to metal contact with all forces being transmitted through the elastomeric seal. They can consequently flex and allow some degree of rotation, allowing pipes to shift and relieve stresses imposed by soil movement. The corollary is that unrestrained spigot and socket joints transmit essentially no compression or tension along the axis of the pipe and little shear. Any bends, tees or valves therefore require either a restrained joint or, more commonly, thrust blocks, which transmit the forces as compression into the surrounding soil.

An expected lifespan of 100 years is likely for ductile iron pipe, based on test results, field inspections and in-service operations over 50 years.

The potential for corrosion, leading to pipe failure, is significantly impacted by the corrosivity of soil. Unprotected pipes in highly corrosive soil tend to have shorter lifespans

Cathodic protection may also be used to prevent corrosion and tends to be advocated by corrosion engineers for pipes in corrosive soils as an addition to external dielectric coatings.

Ductile iron pipe is somewhat resistant to internal corrosion in potable water and less aggressive forms of sewage. However, even where pipe material loss and consequently pipe wall reduction is slow, the deposition of corrosion products on the internal pipe wall can reduce the effective internal diameter. A variety of linings are available to reduce or eliminate corrosion, including cement mortar, polyurethane and polyethylene. Of these, cement mortar lining is by far the most common.

Polyurethane is an option offered as an internal lining for ductile iron pipes in lieu of cement mortar. However, as PUR provides only passive protection it becomes vitally important that the coating is not damaged during handling and installation. Manufacturers will specify strict handling, transport and installation procedures to ensure PUR coatings are protected. If pipes are deformed Polyurethane’s elasticity, does in some situations allow the coating to remain intact.

Polyurethane coatings lining exhibits a high resistance to various different media such as drinking water, wastewater, de-mineralised water, industrial water and gas, as well as to aggressive solutions such as sulphuric acid.

Polyurethane is a thermosetting plastic with no solvents, with a three-dimensionally linked molecular structure giving it mechanical stability. The polyurethane lining used for internal coating has the following standard properties is standardised by EN 15655:2009 (Ductile iron pipes, fittings and accessories – Internal polyurethane lining for pipes and fittings – Requirements and test methods).

The predominant form of lining for water applications is cement mortar centrifugally applied during manufacturing. The cement mortar comprises a mixture of cement and sand for potable water, Portland cement is used; for sewage, it is common to use sulphate resisting or high alumina cement.

Loose Polyethylene Sleeving (LPS) remains as one of the most cost effective corrosion protection methods available today with a proven track record for reliability and effectiveness.

LPS comprises a loose sleeve of polyethylene that completely wraps the pipe, including the bells of any joints. The sleeving inhibits corrosion by a number of mechanisms. It physically separates the pipe from soil particles, preventing direct galvanic corrosion. By providing an impermeable barrier to ground water, the sleeve also inhibits the diffusion of oxygen to the ductile iron surface and limits the availability of electrolytes that would accelerate corrosion.

Polyethylene sleeving is standardised according to ISO 8180 internationally

Ductile iron pipe is typically manufactured with a zinc coating overlaid by either a bituminous, polymeric, or epoxy finishing layer. EN 545/598 mandates a minimum zinc content of 200 g/m2 and a minimum average finishing layer thickness of 70 µm (with local minimum of 50 µm).

Ductile iron pipe prior to installation, pipe is instead supplied with a temporary 1 mil or 25 µm thick bituminous coating. This coating is not intended to provide protection once the pipe is installed. 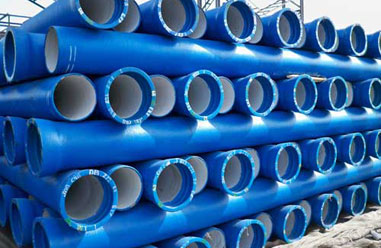 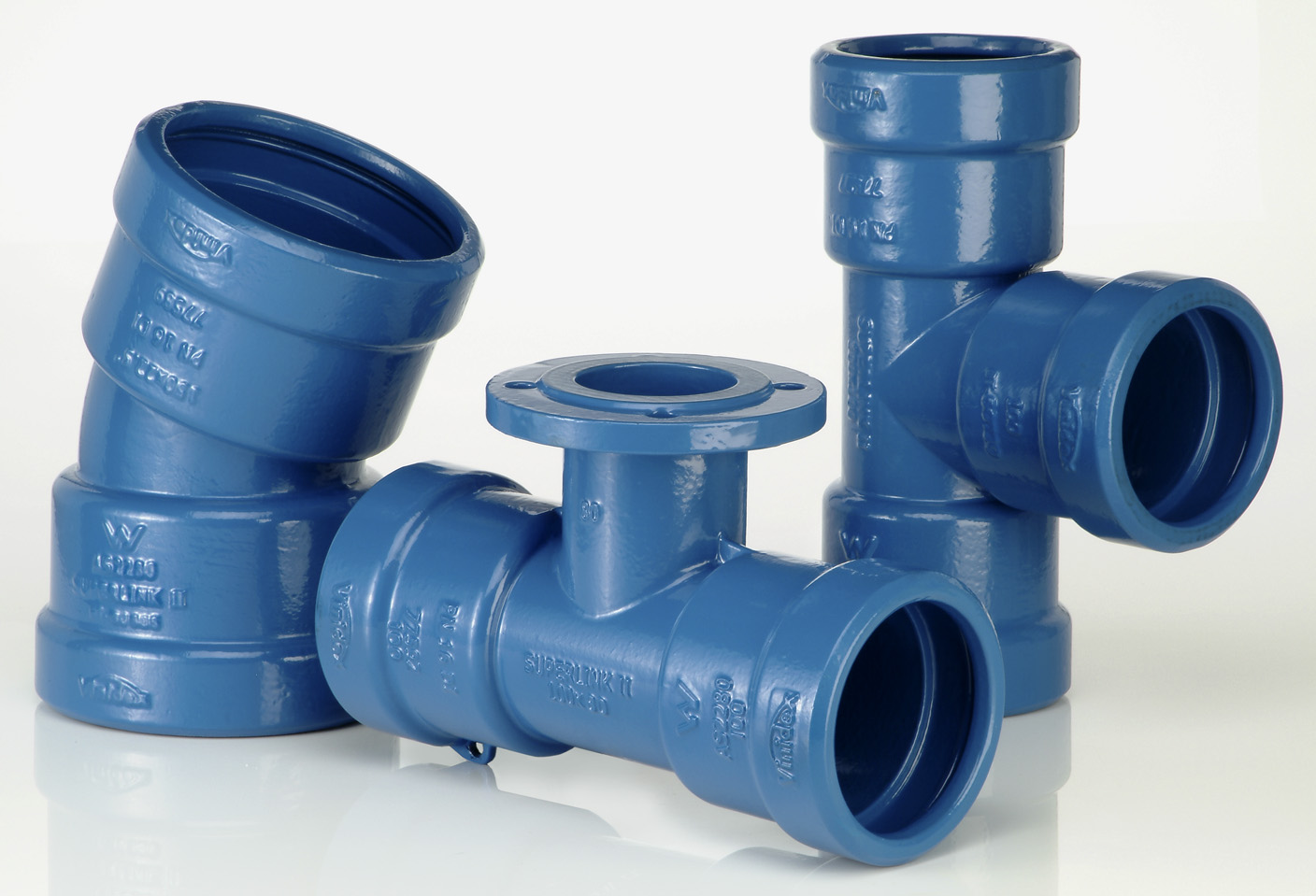 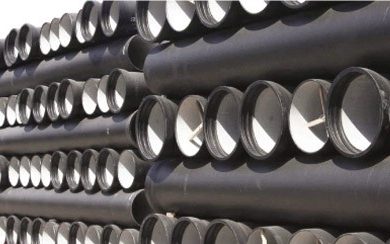 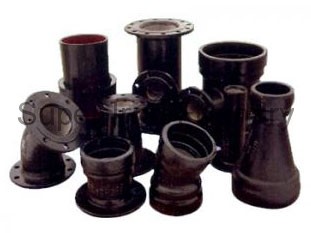 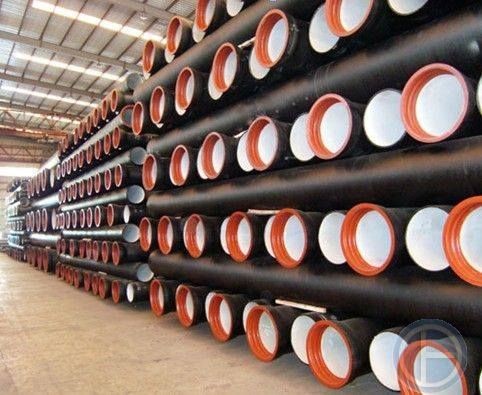 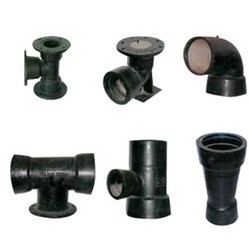