A grating is any regularly spaced collection of essentially identical, parallel, elongated elements. Gratings usually consist of a single set of elongated elements, but can consist of two sets, in which case the second set is usually perpendicular to the first (as illustrated). When the two sets are perpendicular, this is also known as a grid (as in grid paper) or a mesh.

Guard rail, guardrails, or protective guarding, in general, are a boundary feature and may be a means to prevent or deter access to dangerous or off-limits areas while allowing light and visibility in a greater way than a fence. Common shapes are flat, rounded edge, and tubular in horizontal railings, whereas tetra form spear-headed or ball-finialled are most common in vertical railings around homes. Park and garden railings commonly in metalworking feature swirls, leaves, plate metal areas, and/or motifs particularly on and beside gates. 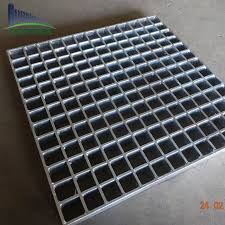